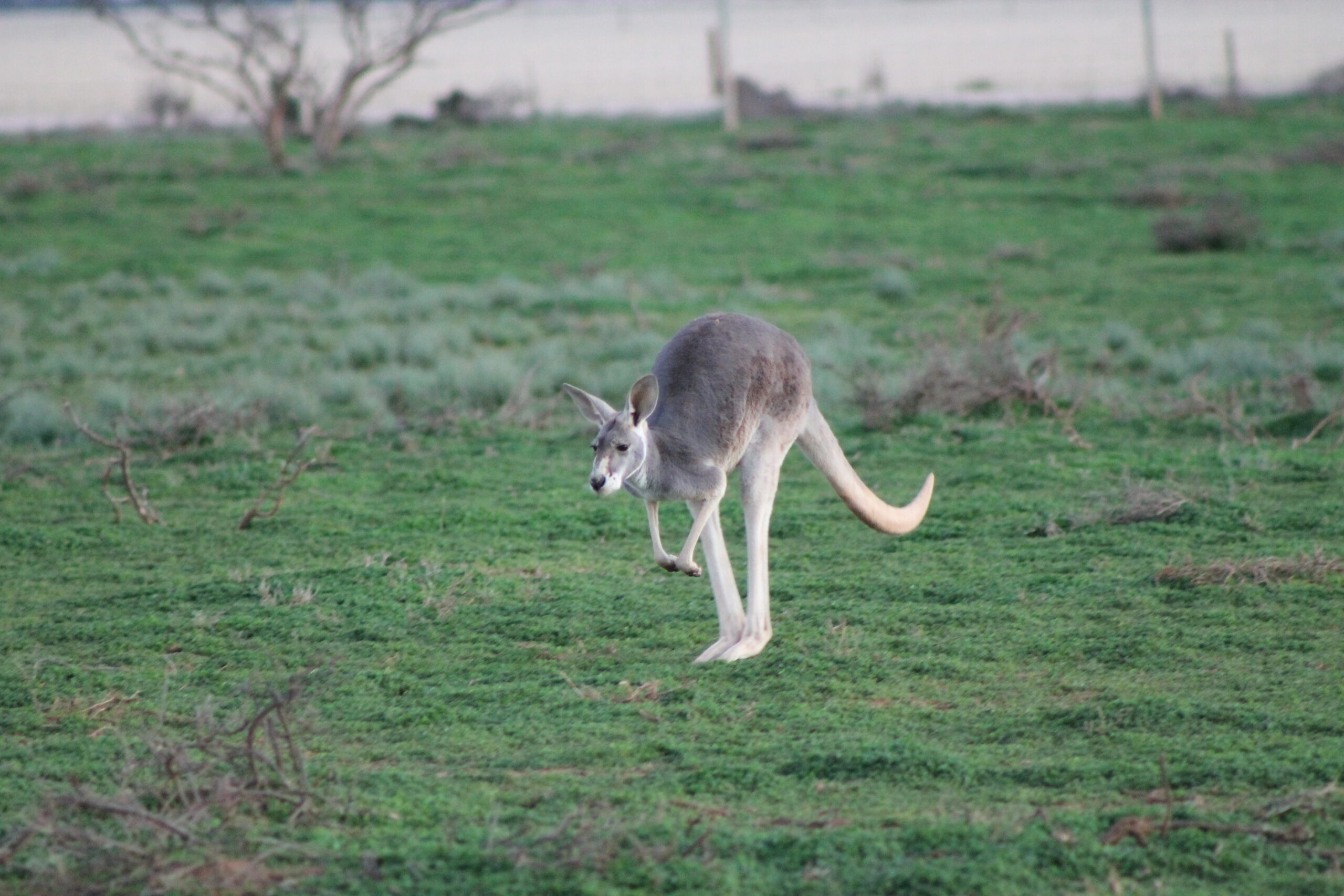 TRUTH:
Kangaroos are not farmed. Wild kangaroos are shot during the night in rural locations.

Hunters leave dead kangaroos on the ground, touching each other, causing cross-contamination, and the bodies to be covered in dirt and insects. For transport, dead kangaroos are hung from the back of an open truck. As the truck travels through the night, dust, flies and faeces cover the dead bodies. Shooters often travel long distances for their night’s kill. Federal laws allow shooters to hang dead kangaroos on the back of open-air trucks for up to 14 hours.

TRUTH:
There is no definition for overabundant.

“Basically, it comes down to a handful of lobbyists and other squeaky wheels defining anything they deem to be a nuisance as ‘overabundant’, irrespective of its threat status, ecological role, or purported impacts. It is, therefore, entirely subjective, and boils down to this: “If I don’t like it, it’s an overabundant pest”. (CJA Bradshaw, Matthew Flinders Professor of Global Ecology, Flinders University, South Australia)

MYTH:
Kangaroos are in plague proportions.

Eastern grey kangaroos have a population density in excess of 10 kangaroos per square kilometre in 5 out of 21 mangement zones in Queensland and zero out of one management zone in South Australia.

TRUTH:
Contemporary science agrees that the maximum population growth rate is 10% (Arnold 1991; Bilton & Croft 2004). A female kangaroo aged 2 to 3 years old will have one joey a year. A joey stays in the pouch for approximately 11 months, which means a female kangaroo can only have one joey a year. Averaged across species, it takes an average of 18 months for a kangaroo joey to become fully independent of its mother (eg Poole 1975; Jackson; Staker, L; Dawson 1995).

MYTH:
The shooting of kangaroos is humane because kangaroos are shot in the head and die instantly.

TRUTH:
An independent assessment of compliance with the Code, carried out by Animal Liberation NSW between 2005 and 2008, has identified an average of 40% of kangaroos per chiller in 24 chillers throughout New South Wales and Queensland were neck shot. Neck shot kangaroos may suffer a painful death, which is a clear transgression of humane practices and the Code guidelines. (A Shot in the Dark: A Report on Kangaroo Harvesting by Dror Ben-Ami, PhD, 2009)

Cole has come home with 16 roos, a disappointing tally. He shot two more, but couldn’t find them to retrieve. He’d climbed onto the tray, looked through the monocle that uses thermal imaging to detect body heat, but no good. (From dusk to dawn: A night in the life of a roo shooter, ABC News, 2018)

No one knows how many kangaroos are injured and disappear into the bush to die slow, painful deaths. Injured kangaroos are never recorded or acknowledged by the commercial industry.

MYTH:
Kangaroos need to be culled.

The annual kangaroo cull in Canberra is an example of kangaroos being unnecessarily killed. The ACT Government claims that in sites where kangaroo numbers are unsustainable, a reduction in kangaroo grazing pressure is necessary to ensure habitat is restored and maintained for a range of native species.

The above photo reveals two signs on the gate of a nature reserve in Canberra, ACT. One sign indicates that the reserve is closed due to firearms in use – that is, during the annual kangaroo cull. The second sign explains that ecological grazing of cattle is being used to reduce plant material and improve habitat for threatened species such as the golden sun moth. On the one hand the ACT Government claims that kangaroos need to be killed to protect plant material from too much grazing and to restore habitats, then on the other hand the ACT Government indicates that cattle grazing will be used to reduce plant material and improve habitat.

Each day, one cow eats the equivalent of 60 kangaroos. Let’s say kangaroos are killed to stop them over-eating plant material and to restore habitat, then 50 cows are brought in to reduce plant material and improve habitat – the 50 cows will eat the equivalent of 3,000 kangaroos. The nature reserve was never home to 3,000 kangaroos, so the grazing of 50 cows alone will cause grazing like this reserve has never seen before.

The following photo was taken in a kangaroo sanctuary in which 70 kangaroos are full time residents. The photo shows no signs of over-grazing by kangaroos.

MYTH:
The commercial killing of millions of kangaroos every year is sustainable.

TRUTH:
During drought kangaroo numbers are known to decline by up to 65%. In 2019-2020, unprecedented bushfires in Australia killed an estimated 3 billion animals. No one knows how many kangaroos were killed. Yet, the commercial killing of kangaroos continues.

The killing of kangaroos is driven by market demand, not sustainability.

TRUTH:
“The conventional wisdom is that kangaroo (Macropus spp.) numbers have increased in Australia since European settlement due to cessation of predation by Aborigines and dingoes (Cpnis lupus dingo), as well as increased availability of water. The historical record shows that at the time of first European contact the kangaroo was numerous and abundant over the continent and Tasmania.

“Water supplies were largely unimproved by 1860 when Australia de-pastured domestic livestock equivalent to 110 million kangaroos. In 1880 when there were 240 million kangaroo-equivalents, water supplies had been upgraded only in closely settled areas. It seems probable that at the time of settlement kangaroo numbers exceeded the present population at least threefold.

“EXAMINATION of the historical record reveals that kangaroos (Macropus spp.) were widespread in their distribution at the time of European exploration and settlement of Australia and are usually described as being numerous or abundant.

“The population was probably of the order of one to two hundred million.” (Red Plague Grey Plague: The Kangaroo Myths and Legends, Joe Auty, 2004)

MYTH:
Kangaroo numbers have increased since European settlement due to increased availability of water.

TRUTH:
“The interpretation that these numerous water sources are necessary to sustain the kangaroo population is a falsehood generated by looking at the landscape though the eyes of a livestock manager. This viewpoint started with the very first explorers into the inland.

“Kangaroos have a long narrow muzzle and equally long tongue with which they lap water making small ephemeral sources accessible (Fig. 8). If surface water is not available kangaroos will dig soaks in creeks gaining access to further water that is not available to livestock.
Furthermore, all the species of kangaroos need much less water than livestock. Graziers normally budget 10 litres per day for sheep with this potentially doubling in a hot dry summer. The water turnover in summer is around 1 litre tor a 25 kg red kangaroo or euro and 1 75 litres for a 25 kg eastern grey kangaroo. Not all of this is required from drinking as water taken in with plant matter and created by oxidation of foodstuffs both add to the water budget.

“Thus kangaroos are relatively miserly drinkers compared lo livestock and certainly people. They lap with a long and narrow tongue and do not suck water. They can exploit water sources that are small and shallow, which are insufficient for livestock.

“Furthermore, my observations made during a study of drinking behaviour (Croft 1985) revealed that they will readily lap muddy and algae infested water that is unacceptable to sheep. For kangaroos, light rainfalls across the hotter months will maintain adequate ephemeral water sources in the many catchments from claypans and gilgais to swamps and lakes. Many of these have been silted up by the much accelerated erosion introduced by livestock and overstocking (Fanning 1984: Condon 2002). Large water holes have been replaced but not necessarily supplemented by earthen tanks. Many of the latter lie on top of old springs or simply create deep holes in existing swamps. Kangaroos may have expanded the‹r range into areas of central Australia where artesian bores have provided water (Newsome 1980) but equally much well-watered habitat has been lost to irrigated horticulture and crops along inland rivers.” (The future of kangaroos – Going, going, Gone? Croft 2005)

Millions of creeks used to run through Australia. Most of them are now dry due to large dams and reservoirs. While farmers have introduced small water points for livestock, most of the creeks and rivers are no longer available to kangaroos due to dams, reservoirs and irrigation. However, research indicates that kangaroos require very little water. During drought, kangaroos die from lack of food, not lack of water.

MYTH:
Kangaroo numbers have increased since European settlement due to a lack of predator.

TRUTH:
Kangaroos have many predators.

“Dingoes that live in temperate and sub-tropical eastern Australia more commonly dine on medium-sized and large mammals, including bandicoots, possums, wallabies and kangaroos. For instance, one study from the Blue Mountains found that large mammals occurred in more than 80% of dingo scats, including swamp wallabies in 29% of scats and wombats in 11%.” (Doherty, 2018)

Feral and domestic dogs also kill kangaroos. Foxes kill 50% of all joeys born (Banks, 2000). Between 80 and 90% of a wedge-tailed eagle’s diet is made up of ground-dwelling animals, including rabbits, wallabies and small kangaroos.

During drought, kangaroo numbers plummet by up to 65%. Kangaroos don’t breed during drought. Every year, bushfires kill unknown numbers of kangaroos.

“Kangaroo poo is THE best natural fertiliser on the planet, ask any sustainable food producer.

“Research shows that mixed grazing, at sustainable stocking rates between cattle and kangaroos or sheep and kangaroos, is more productive and ecologically sound as kangaroos counteract the destructive grazing patterns of introduced hard-hooved livestock.

“Kangaroos are a keystone species upon which various other indigenous species of flora and fauna depend for their own survival.” (Aunty Ro Mudyin Godwin, 2019)

“The soft padded feet and long tail of the kangaroo are essential for the ecological health of the land as regenerators of native grasses.” (D Ramp)

In 2000, two studies (Pople and McLeod, Olsen and Braysher) concluded that competition between sheep and kangaroos seldom occurs because food is not limited or food choices and feeding sites differ.

“Kangaroos and sheep have not been demonstrated to compete to any significant degree because of differences in diet and spatial use of pastures, except under very poor forage conditions. Grigg (2002) cast serious doubt upon the common assumption that kangaroos have 70% of the food requirements of sheep (a DSE of 0.7), proposing that the correct figure may be 20% (a DSE of 0.2). Dawson and Munn (in press) have since improved the estimate, to 0.48 (48%) using captive animals. This decreases any likelihood of competition and economic loss associated with grazing by kangaroos, and suggests that predictions and estimates based on the old DSE estimates exaggerate kangaroo impacts.” (Penny Olsen & Tim Low, 2006).

MYTH:
Kangaroos cause $90 million damage to crops, fences and equipment.

TRUTH:
This myth is common but little research has been done to prove or disprove this myth.“Indeed, there is little convincing evidence of substantial damage by kangaroos to crops, pastoral production or rangelands, except in a few localized areas.” (Penny Olsen & Tim Low, 2006)

“Kangaroos generally keep within 100 m or so of the bush that they use for shelter, so crop damage is usually restricted to this zone of the paddock. Measurements were made of crop losses from kangaroos in crops bordering the Tutanning Reserve near Pingelly. These averaged 1 to 2 per cent of paddock yield. Similar results were obtained for crops around the Durakoppin Reserve at Kellerberrin. In some situations losses will be higher, but more than 95 per cent of crops in the wheatbelt are never visited by kangaroos.” (Dr Graham Arnold, 1990)

“Pests is an emotive word. It conjures up visions of animals destroying crops. I can think of no situations where this is likely to be true for kangaroos.” (Dr Graham Arnold, CSIRO)

“Sometimes damage is attributed to kangaroos but the real perpetrator is another animal or even insects. In the Kinchega area, the NSW NPWS first thought that damage to vegetation during the 1982-83 drought was caused by kangaroos, but further investigation indicated that pasture insects were responsible. The Queensland NPWS has also drawn attention to the role of native insects, particularly termites, in pasture losses. Other animals such as pigs, mice, rabbits, hares, donkeys, goats, wombats and emus may also be responsible for damage to pasture.” (Senate Select Committee on Animal Welfare, 1988)