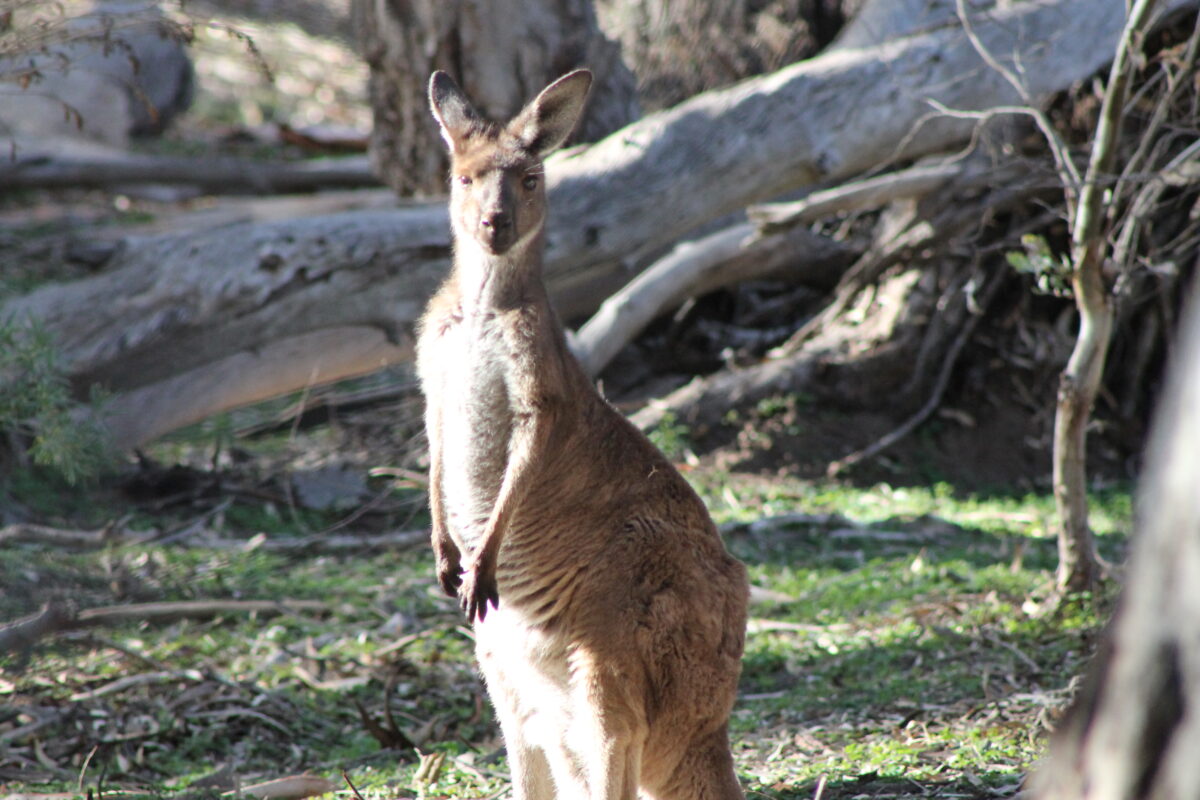 The Australian Government and the kangaroo industry would like you to believe that the practice of killing kangaroos is humane and beneficial, even to kangaroos. Let’s see for ourselves.

The following instructions on how to euthanise young kangaroos is taken from the National Code of Practice for the Shooting of Kangaroos and Wallabies for Commercial Purposes produced by the Australian Government:

Concussive blow to the head
* The most suitable method that is currently available for the euthanasia of partially-furred to fully-furred young is a concussive blow to the head (also called blunt force trauma). This method is considered acceptable as the skulls of pouch young are small, soft and thin. When it is applied correctly, unconsciousness and death will occur rapidly.
* A single sharp blow to the central skull bones induces death by physical (or mechanical) damage to the central nervous system and disruption of brain activity. Death then occurs as a result of respiratory and cardiac failure.
* The efficiency and humaneness of this method depends on the operators’ skill and determination. The concussive blow must be delivered with sufficient force and be precisely on target to ensure that adequate damage occurs to vital structures of the brain to cause immediate and sustained unconsciousness and death.
* If this procedure is not performed correctly there will be varying degrees of consciousness and it is likely that the animal will suffer prior to death. If the first blow does not hit the skull but hits for example, the jaw or a limb, or if the brain is not sufficiently destroyed, then the animal will experience pain and distress.
* To deliver the concussive blow, remove the young from the pouch, hold the young firmly by the hindquarters (around the top of the back legs and base of tail) and then swing firmly and quickly in an arc so that the joey’s head is hit against a large solid surface that will not move or compress during the impact (e.g. the tray of a utility vehicle).
* DO NOT hit the joeys’ head against the railing of the utility rack, as this can result in decapitation rather than the intended concussive blow to the head.
* DO NOT suspend joeys upside down by the hindquarters or tail and then try to hit the head with an iron bar (or similar). Holding them in this manner allows the joey to move around and makes it difficult to make contact with the correct location on the head. In addition, the force of the blow may not be sufficient to render the joey unconscious with only one strike.
* Confirmation of the onset of death should occur immediately after the procedure and death must be confirmed within 3 minutes.A combination of all of the following criteria is the most reliable for confirming death:
– No heartbeat
– No breathing
– No corneal reflex (no blinking when the eyeball is touched)
– No response to a toe pinch (a firm squeeze of the pad on the large toe).
* An animal is still conscious (sensible) and may be suffering if it is vocalising, attempts to get up, lifts up its head or is blinking.
* If onset of death or death cannot be confirmed, the procedure must be repeated (i.e. apply another blow) or a secondary method of euthanasia (i.e. bleeding out by cutting the carotid arteries and jugular veins in the neck, or decapitation) applied if the animal is stunned (or unconscious).
* Death must be confirmed before leaving or disposing of the carcass.

The National Code of Practice for the Shooting of Kangaroos and Wallabies for Commercial Purposes was updated in November 2020. Feedback was sought from commercial shooters at forums in New South Wales and Queensland. The research team gave a short presentation, which was followed by an open discussion of any issues or concerns.

Commercial shooters raised the following concerns:
Clarification is required on what methods can be used and how they should be applied in relation to euthanasia methods for pouch young. Some shooters are still using methods not compliant with the Code. Some shooters are still releasing larger pouch young they think can survive. More guidance is required to help make judgements about whether orphaned young-at-foot are weaned (or close to weaning) and therefore more likely to survive without their mother.


According to the report The ethics of the commercial killing of free-ranging kangaroos: an evaluation of the benefits and costs of the industry (Ben-Ami et al, 2014): On average, some three million kangaroos are commercially killed annually (Table2). A projection based on the above considerations (as there is no formal assessment) and the national commercial kill statistics (Department of Sustainability, Environment, Population and Communities [DSEPC] 2010) for the period 2000–2009 estimates that approximately 840,000 females, 210,000 young-at-foot and 590,000 pouch young were killed annually (Table 2).

The report states: the welfare costs include deliberate and indirect harm to dependent young (a by-product of the commercial kill), and a number of unintended harms to adult kangaroos, including increased mortality during drought, inhumane killing of a portion of adult kangaroos, and a disruption of social stability and the evolutionary potential of individuals. Furthermore, a substantial gap exists between the intended welfare standards of the code of practice governing the kangaroo industry and the welfare outcomes for both dependent young and adult kangaroos. We found that, on balance, the benefits are lower than expected and the welfare costs are likely to be considerably higher than acceptable.

The report continues: Our analysis suggests that some provisions in the Code relating to best practice by shooters are not met. First, it is unlikely that young-at-foot are killed when their mothers are shot (see above) as required by the Code (Table 1). Second, there is a strong concern about the fate of mis-shot adults. As noted above, existing evidence from RSPCA Australia and Animal Liberation NSW suggests that many kangaroos are not shot in the brain per the desired welfare standard in the Code (Table1), and it is impossible to know how many mis-shot kangaroos are left in the field. The mandated methods for pouch young euthanasia have also been questioned, as discussed above, and there is no requirement for training in the Code—for either the killing of adults, or euthanasia of pouch young.

A study conducted by Animal Liberation NSW of carcasses in 25 chillers between 2005 and 2008, identified that up to 40% of kangaroos per chiller may have been neck shot (Ben-Ami 2009). 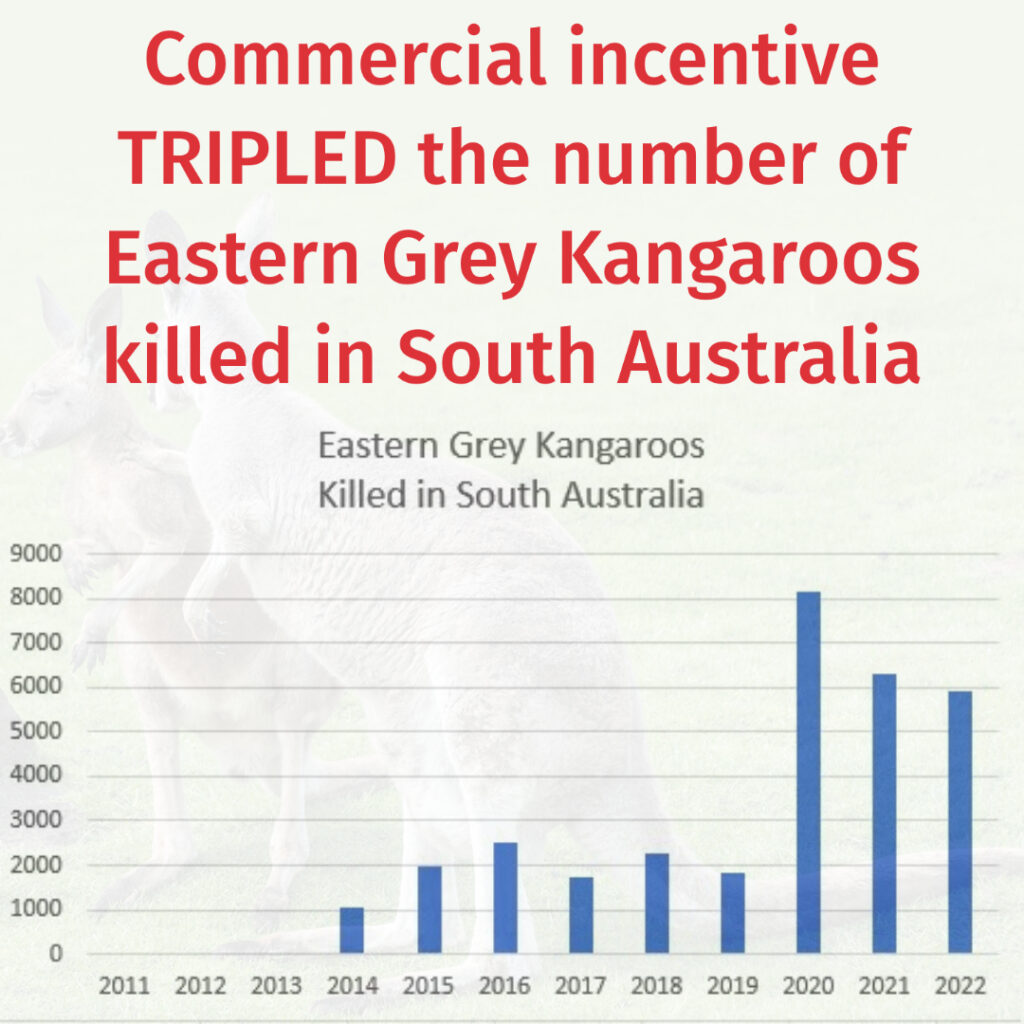 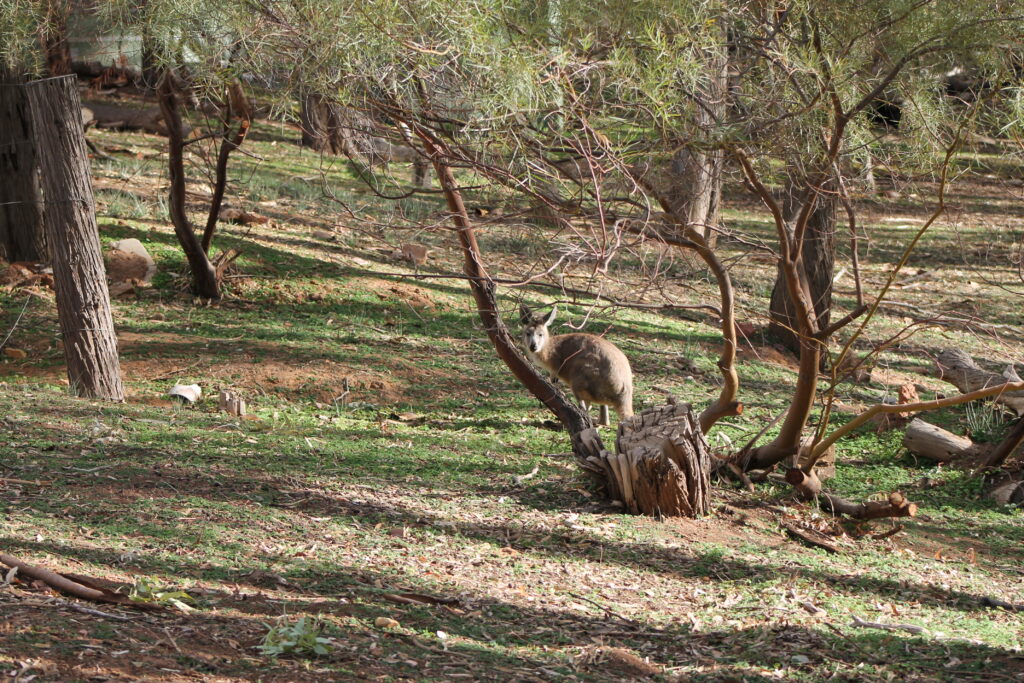 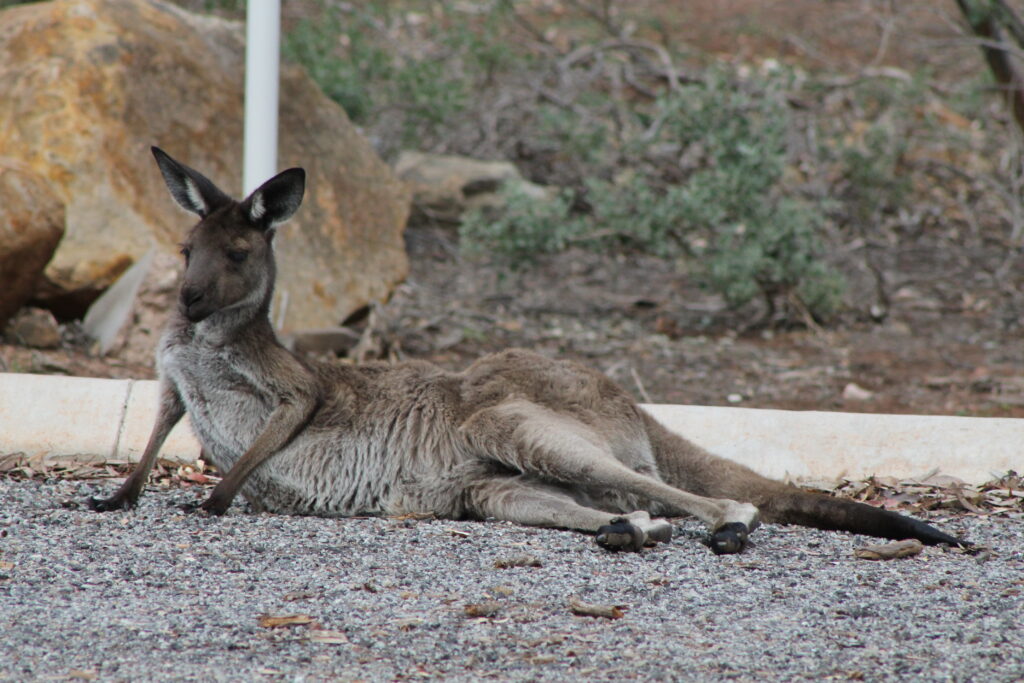 The Dangers of Kangaroo Meat

admin / May 10, 2021
The following information can be downloaded as a PDF. Leaflet-Dangers-of-Kangaroo-MeatDownload Unhygienic Wildlife Trade Kangaroos are not farmed. Wild kangaroos are...
Read More
commercial killing of kangaroos, kangaroo meat, unhygienic kangaroo meat 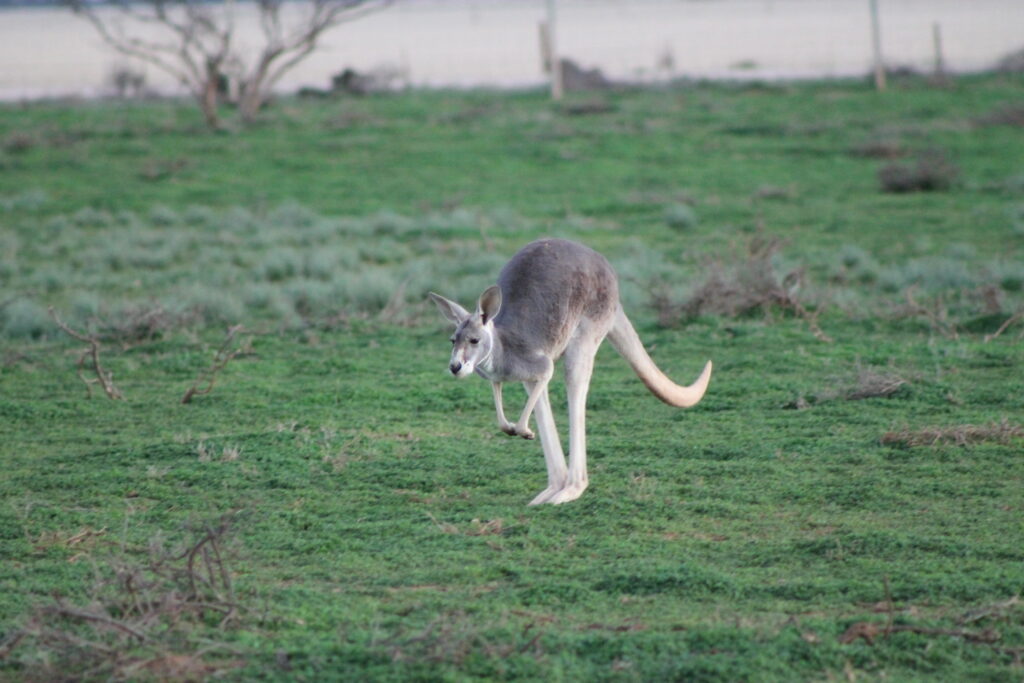 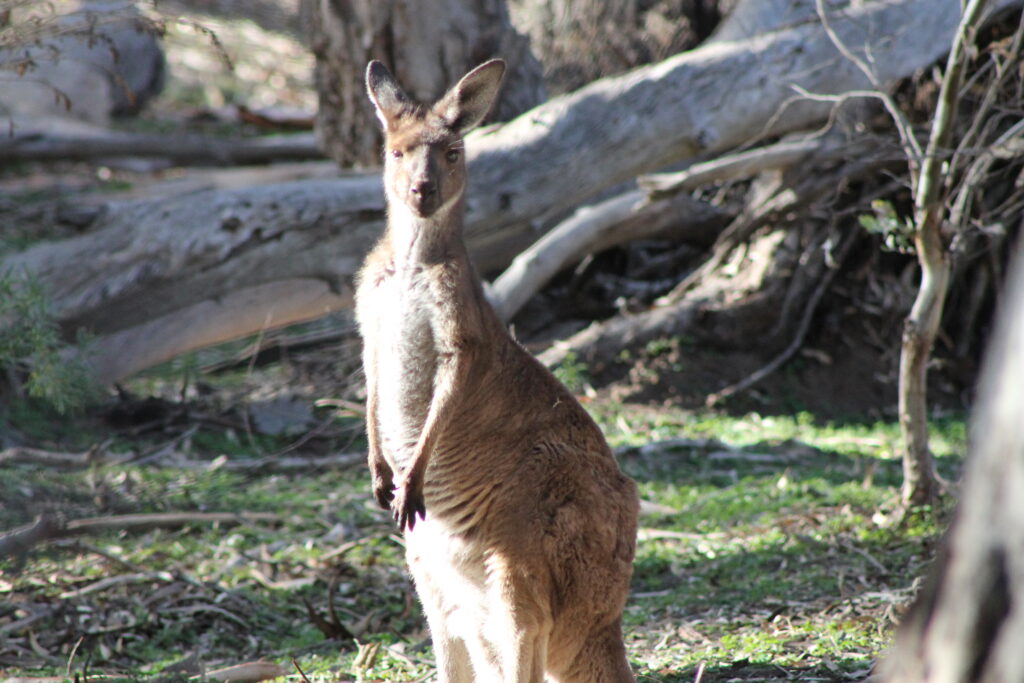 admin / May 9, 2021
The Australian Government and the kangaroo industry would like you to believe that the practice of killing kangaroos is humane...
Read More
bludgeon joeys, blunt force pouch joeys, commercial harvest, inhumane killing, killing kangaroos, killing pouch joeys, National Code of Practice for the Shooting of Kangaroos and Wallabies for Commercial Purposes